Full Name
Roger Markovics
Job Title
Board of Directors Secretary
Organization
Albany Community Land Trust
Speaker Bio
Roger Markovics has been working as a community organizer in Albany, NY, since 1970 in a job sharing arrangement with his wife, Maria, through Albany Catholic Charities. In 1971 their joint organizing efforts brought together a group of low-income tenants that eventually became the United Tenants of Albany. As United Tenants became established it evolved into a base for community organization campaigns addressing problems with slumlords, community disinvestment, and abandonment with rent strikes, coalitions advocating for effective code enforcement, protests against real estate developers about displacement, and Community Reinvestment Act challenges with banks about redlining. They were the lead organizers in creating neighborhood associations and non-profit housing groups to initiate local reinvestment projects, and Maria and he became active in state and national coalitions advocating for greater protections for tenants and increased funding for the development of affordable housing.

Through Roger’s work at United Tenants these campaigns produced community-based regional organizations addressing housing problems, including the Community Loan Fund of the Capital Region (CLF), the Albany Community Land Trust (ACLT), and the Affordable Housing Partnership (AHP). Roger continues this work in different roles on the boards of directors of the ACLT and the AHP as these organizations created subsequent regional endeavors, including Community Realty (a non-profit real estate sales service) and HomeSave (a regional network of housing counseling and legal services organizations working on foreclosure prevention). As these organizations have grown they have formed a Community Development Alliance connected with United Tenants (all located at 255 Orange Street in Albany) to both develop and preserve affordable housing with an expanding grass roots leadership.

Roger and Maria are active on the board and committee level with several other local and statewide organizations addressing socio-economic problems at the grass roots level. In addition, Roger and Maria have received a number of awards and commendations for their work, and have taught courses based on their community organizing experiences as adjunct faculty at local colleges. One of Roger’s more memorable experiences was a three year term on the Catholic Campaign for Human Development National Committee from 1978-80. 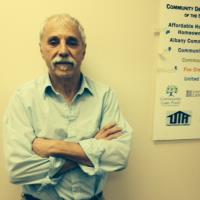