Before coming to the Endowments, Matthew served in various roles in nonprofits and local governments, with a particular emphasis on issues of sustainability, civic design and planning, and policy analysis. As program director for The Buckminster Fuller Institute in Brooklyn, N.Y., Matthew ran an international design program called The Buckminster Fuller Challenge and a youth-focused design and sustainability workshop called The Design Science Lab. As a graduate researcher, he contributed to PlaNYC, New York City’s long-term sustainability plan, focusing on food systems and stormwater management. After moving to Pittsburgh in 2010, Matthew worked as policy director for then-City Councilman William Peduto, and later served as policy manager for the City of Pittsburgh after Mr. Peduto was elected mayor.

Matthew received a bachelor’s degree in urban environmental planning from The New School and a master’s degree in environmental science and public policy from Columbia University, both in New York City. He lives in Lawrenceville with his partner Adam and their two dogs, Henry and Yuki.
Speaking At
Local Highlight: Policy and Programs in Pittsburgh 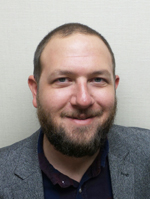